You’ll probably not be at all surprised to hear that my colour and style knowledge was immensely useful when it came to planning my wedding. As you know, I visited House of Colour back in 2010. You might not know that I got engaged in February 2012 and married in May 2014. Armed with my colour and style knowledge, I felt very prepared and excited at the prospect of planning a wedding; I was especially excited about picking a theme, finding a dress and deciding on a colour scheme.

What I noticed, on my initial wedding magazine binge, is that weddings and wedding dresses especially are at the mercy of fashion and trends as much as anything else. This actually proved to be a tad frustrating. I bought a number of wedding magazines, all featuring the latest ‘must-have’ wedding accessories, dresses and decorations and I was left uninspired. It all looked the same and I became rather bored. I’m pleased to say though that I found many exciting gems online, and the planning began in earnest. Thank goodness for Pinterest.

The theme of the wedding came to me quite quickly and was heavily inspired by my Natural Ingénue Pinterest board. I gleefully scoured wedding blogs (much more variety there in terms of themes, decorations and dresses) and quickly discovered that I loved the very natural, outdoorsy weddings (as a Ingénue Natural that made perfect sense). I found myself drawn to floaty lace dresses, flower crowns, pretty lanterns, watercolour invitations, capes (instead of veils – more ethereal and less traditional). I created a private wedding Pinterest board, a glimpse of which can be seen here:

I decided on a name for my theme – ‘Enchanted Forest’. All my choices from that point on became easier with the theme in mind. Picking a venue became much easier too. I knew it had to be something that suited the theme; a fancy modern hotel wasn’t going to cut it. I also knew, after some research, that I wanted a more informal, rustic cake (the Natural influence!). I ended up with this beauty, made by the ridiculously talented Debbie Brooke of Brookes Bakes.

I designed the wedding invitations and ‘Save the Date’s myself, inspired by watercolour invites I’d spotted on Pinterest.

Before I go any further I want to entertain you with photos of some of the dresses I tried. I tried on many, some of which I strongly suspected would look daft, but I tried them on anyway and they only served to reassure me that I did know what suited me both in terms of style and dress shape. I knew what I wanted, it was just a matter of finding it.

I found the wedding dress hunt fascinating, I especially loved overhearing other brides trying on dresses. I will admit to feeling so sad whenever I overheard a bride being talked into a dress by a well-meaning relative or friend. I was tempted to intervene at times but of course I didn’t dare!

I went dress shopping with just one of my (very closest) friends who had also been to House of Colour, so she understood my desire to pick the perfect “Nat Ing” dress. Here are a few of the ‘wrong’ (for me) ones I tried.

This dress was the ‘wrongest’ of the lot. I was confident when I tried it on that it wouldn’t suit me. The look on my face says it all. The dress was a proper brilliant white and rather shiny. Needless to say it’d look great on someone else (a Winter Romantic). I tried it on mostly because I’d heard so many stories of how brides often ended up buying a dress that had been picked for them by someone else and it wasn’t something they would have picked themselves.

This dress isn’t awful (I love tulle and I loved the detailing) but I felt rather naked and I felt very uncomfortable with the boob-emphasis. Too sexy for me. Also not very comfortable… The bolero felt too classic. Not for me.

This dress wasn’t awful either but the shape was wrong. I knew I needed some kind of empire line. I felt too glamorous in this dress too, and naked in a strapless gown.

I did try on a dress that was nearly right…

As much as I liked this dress (and it was much closer to what I’d imagined buying) there were a few things I struggled with. Firstly, I knew I’d wear my hair down, which would cover up the back of the dress, rendering the incredible lace and buttons rather pointless.

Secondly, the dress itself was rather thin and my underwear was really quite visible through it. I wasn’t prepared to pay nearly £1,000 for a dress that was see-through. Finally, the sequins on the dress itself stuck up rather awkwardly and they didn’t feel nice. I did like how light the dress was to wear though, after all those heavy large gowns.

Dress-wise, I knew what I wanted and I figured that surely I would find it in one of the many wedding dress shops I visited. I tried on a lot, over 40 dress in the end, to no avail. I ended up asking a stockist near me to order a dress in that I had fallen in love with online. I saw it in the flesh and I loved it just as much as I’d hoped I would (full details of my dress hunt can be found on my now-abandoned wedding blog). I suspected it might be The One and it was. I had it modified a little, as you’ll soon see. Here it is…

All of my bridesmaids had been and had their colours and style done with House of Colour. It transpired that I had two Summers (both Natural Romantics), one Autumn (a Natural Ingénue) and one Spring (a Natural Gamine). Unless I picked red or teal (universally ‘safe’ colours which suit everyone to a greater or lesser extent) I was going to struggle to find a colour that looked incredible on them all. I didn’t want red or teal because of the contrast it’d create between me (in ivory) and them. Initially I’d pondered olive green to go with the ‘enchanted forest’ theme I had in mind but in the end my House of Colour consultant wisely persuaded me to go with a more neutral Summer colour so that ultimately I was flattered by it and the Summer bridesmaids didn’t look ill the whole day. I draped my soon-to-be husband before the big day (beer and bribery were involved) and it transpired he was also an Autumn (a Natural, as it happened). I had suspected as much! He would have suited brown best but grey better suited the other colours in the scheme and looked good with the bridesmaids dresses. My bridesmaid dresses were eventually purchased from Monsoon, a shop typically favoured by the Naturals for its ethnic-inspired patterns and by the Ingénues for it’s attention to detail and pretty lace.

I will admit it was difficult to make decisions about colour and styles knowing full well I couldn’t cater for everyone. I did feel guilty (not least because I’d badgered them all to go to House of Colour after I’d been!) but ultimately cohesion was the main goal in terms of both theme and colour and needless to say everyone else was far less bothered about what they wore than I was!

Something else I spent a lot of time thinking about was my wedding ring. I knew I didn’t want the matching ring that was designed to fit my engagement ring; the matching wedding ring was a very odd shape and very plain. I don’t like plain. I decided, after some discussions with a jeweller, that I wanted a wishbone ring which I figured wouldn’t look odd if I were to wear it without the engagement ring. David White of White Designs Jewellery crafted a wishbone ring to fit perfectly, and he very patiently helped me figure out what I wanted on it. I knew I wanted engraving but picking the design was harder than I had expected. We went for a running leaf design in the end (after many samples!) because the softness and the sharpness of the design mirrored the angles of the stone.

Anyway! Without further ado, I shall reveal my official wedding snaps. My photos were taken by the incredible Hannah MacGregor of Funky Photographers, she was simply amazing on the day. I couldn’t have asked for a nicer, more organised and talented photographer. It was such a treat to share my day with her. Here are the highlights. 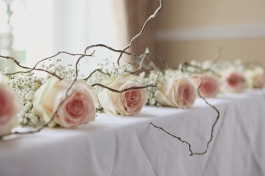 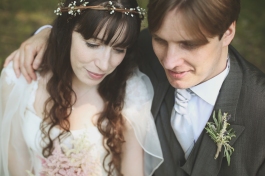 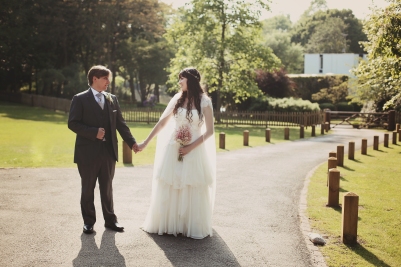 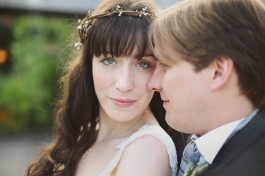 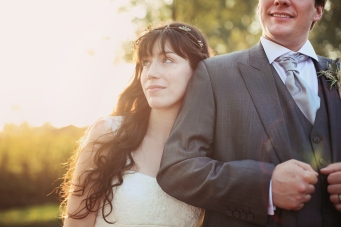 My flowers were made by the desperately talented Amy Curtis. She completely understood my “Nat Ing” vision, as you can tell from the photos. It was such a relief working with someone who really understood what I wanted.

One of my bridesmaids did my hair and I ended up doing my own make-up. I wanted the natural look (surprise surprise!) and I found that all of the MUAs I tried applied too much make-up which I disliked intensely. Turns out you don’t need a tonne of make-up “for the photos”. Total myth.

My only advice (and I was given a lot of advice in the run up to my wedding!) to brides-to-be and future brides would be: 1) Make sure your wedding dress is comfortable (!!!) and 2) make sure you get plenty of sleep the night before, it’s a very tiring, long (but lovely) day. I wish I’d taken sleeping tablets the night before!

Finally, I’d like to do a little ‘shout out’ to Ava – thank you very much for the blog post idea! 🙂

2 thoughts on “My wedding”